The Who-Interview: As PPQ meets Pete 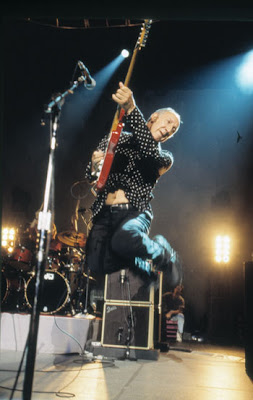 He is the godfather of the e-guitar, the composer of "Tommy" and "Quadrophenia" - and now he is here: Pete Townshend, the head of The Who talks about the past, the present and the future. Right here. Right now.


PPQ: Endless Wire is the first album as a couple. But now that The Who is down to just Roger and yourself, what does it change in the band? Has your musical relationship with Roger Daltrey changed since you both are together alone ?

Townshend: Everything is different. Endless Wire felt like a solo project for a while. Then as I began to produce songs Roger assumed his old role, he started to give me encouragement, guidance, feedback, and when he started singing on the tracks I’d recorded he made them come to life like old Who tracks of the past. Even so, everything is still different.

Roger and I feel blessed. We have each other, we go all the way back to school together. We miss Keith and John but we have Zak Starkey, and other great musicians in our band.

Roger and I are still not close, we don’t spend a lot of time together, but we are much more accepting of each other these days. We sometimes don’t agree on creative matters, but we each respect the other’s views. In a way it easier now that there are just two of us because no amount of ‘lobbying’ will change the fact that if we disagree, the subject is closed. In a band with several equal partners democracy rules, and we know that although democracy is fair, it is rarely perfect.

PPQ: In the past we’ve read about your ear-problems. How is your hearing now? How does the loss affect your song writing process?

Townshend: Yes, my ears are getting bigger and bigger every day. You first read about my hearing damage a very long time ago indeed. Journalists haven’t stopped talking about since 1971 when I made my first statements about it. I acted very quickly to reduce my exposure to extremely loud music and thus saved myself. A lot of my damage was caused by earphones, so I use them very occasionally and only when necessary. The damage I have doesn’t affect my music work at all – I actually produced the latest Who album. It is not a sonic masterpiece, but it is not bad sonically. What it does affect is hearing normal conversation in cars, on airplanes. I have to read lips sometimes.

PPQ: Where does your writing process begin? With an idea? A note? Lyrics?

Townshend: In all these ways. I look for inspiration everywhere, but song writing is often about waiting patiently. It is not like writing fiction or researched books when you must write all the time, every day, and be prepared to edit later. It is useful to have a brief, a target, an idea about who it is you wish to reach with your song, or what the song is supposed to do. But then you must empty your mind and wait. Funnily enough, for many musicians the best way to empty the mind is to play music – so sometimes from the meanderings of a meditating musician comes a new song that seems to come from the sky.

PPQ: Does all of what you write in your home studio ever come out on records or is there a mountain of music that nobody ever heard?

Townshend: There is a fair but of music people will never hear. But much of that is unfinished. I have about 1400 pieces of music left over from my last Scoop collection that you can buy on my website www.eelpie.com. Some of these may grow into complete songs, some may never surface. I am fairly prolific because when I do start to write I write a lot. I also write a lot of poetry (not very good poetry) that sometimes works well as the basis for a new song lyric.

PPQ: On the album you talk about maturing. How has this affected you personally?

Townshend: I used to say that one ‘suffers’ from maturity, it is like a disease. But that was because I thought I would feel old when I began to mature. But in fact I feel younger. Getting old is getting young. One of the best lyrics I wrote in the late ‘90s, that never was released, was based on the line: The day the old grew young. There is a moment when suddenly the issue of age is no longer something you can engage with, you can’t discuss it, speak of it or even think of it. I am in that place. Nothing I say about ageing will make sense every again. If you want to know how it feels to be old, speak to someone young.

PPQ: You are still interested in new music, new bands?

Townshend: Always. My passions of the moment are The Tragically Hip, Flaming Lips, Raconteurs, Willy Mason, Amos Lee, Regina Spektor, Rachel Yamagata, Joe Purdey, Alexi Murdoch. I have some really left-field passions musically as well – though they are not all that new, like Sigur Ros and Sufjan Stevens. But I also listening to a lot of Bartok right now. Learning how to play ‘wrong’ notes that are actually right notes.

PPQ: What do you think are the implications of the so-called rock and roll revival - all the new bands like the Strokes and all the others with the "The" before their name?

Townshend: Interesting. I can think of two British bands that do not use the word “The” before their names: Kooks and Editors. Implications? This is – as said back in 1979 – a fire that will never stop burning as long as there are musicians willing to throw themselves into the flames.

PPQ: After all this time as a musician, a writer – what are you most proud of when you look back?

PPQ: What does the future hold for you? Is there a chance for another new Who-album?

Townshend: Yes. There will be another Who-album. I’m not sure when, or what it will be like, but I am committed to do another one. I loved working on Endless Wire. I just hope the songs come.

PPQ: And, excuse me, one last question: In the past you are famous for smashing
your guitars on stage. Will you still do this?

Townshend: No, I don’t do this any more. So much of the cathartic artistic expression contained in this act is now invalid.